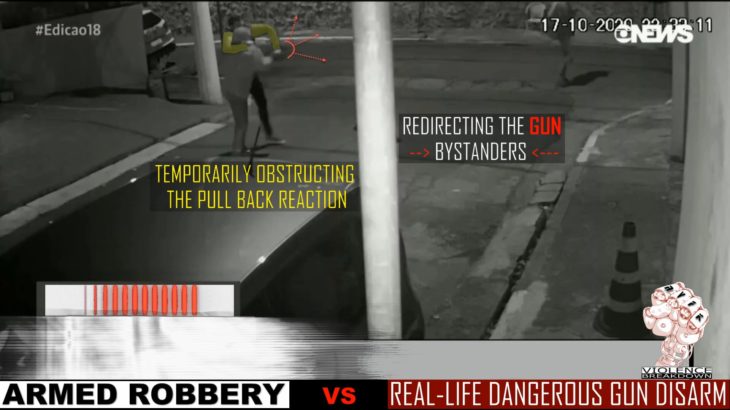 When fighting back a street robber goes wrong!

Some points:
1 » When you control the body -> it’s possible to control the pullback response. Something to work with during your training. Reality is our teacher and master.
2 » You see the robber shoot during the struggle over the gun. There is no control over the mechanics of the gun (or trigger-finger). NO control over the –> Revolver: cylinder/hammer -OR- Pistol: mag/safety pin (if)/hammer (if extern) = NO control over the ability to fire. It’s a different layer of control in comparison with the control over the line/field of fire. Important to make that distinction for several reasons.
3 » Big problem in this situation –> Redirection of the line of fire and the safety of the bystanders.
4 » A clear example of the henchman-friend/henchmen-friends problem.
5 » See a disarming executed from the ground, while we mostly see standing gun disarms in self-defense programs.
6 » Disarming infight = different from disarming a robber in the threatening phase. Realistic training = also dealing with the problems after your first disarming failed.
7 » This robber was attracted to a specific target for a reason. The target gave certain “goodie signals”. So, what will the advice be?
8 » Fighting an armed robber is playing with your life. This = only necessary when your life is really at stake. Typical robbers use threats to get what they want. So hand over the goodies and let them leave. Remember -> in general, there is a clear distinction between a functional threat and actual life-threatening signals (not always, of course).
10 » Knowing what to do after a gun disarm.

Security cameras capture images of an attempted robbery in Itaim Bibi, South Zone of SP, on Saturday night (17) – Photo: Reproduction / TV Globo
Images from security cameras show the moment when two men, 25 and 27 years old, were shot in an attempted robbery at Itaim Bibi, in the South Zone of São Paulo , on Saturday night (17). The victims were rescued at Hospital São Luiz. One of them was shot in the chest and another in the foot.

The footage shows that the young men were walking when they were approached by an armed suspect who announces the assault. Other boys were passing by at the time of the action. It is possible to see that one of them, on a bicycle, manages to escape when the assailants announce the assault.

The two victims end up cornered by criminals. After the approach, one of the youngsters reacts to the assault and enters a physical fight with the assailant, while the other tries to disarm him. The three fall to the floor. Then there are two other suspects, who shoot at the victims. After the shots, the criminals take a gun that had fallen to the ground during the fight and flee.

The police will use images from security cameras to try to identify the perpetrators of the crime. Two deflagrated capsules, found at the scene, were seized for examination. The case was registered in the 14th Police District (DP), in Pinheiros.

SOURCE: https://g1.globo.com/sp/sao-paulo/noticia/2020/10/18/cameras-de-seguranca-mostram-vitimas-de-assalto-serem-baleadas-no-itaim-bibi-zona-sul-de-sp.ghtml
==============
**DISCLAIMER**
Our content = for educational purposes only. We do NOT GLORIFY VIOLENCE in any way! Please read our story on Social media / Website / Patreon. When you have more background information, or you notice mistakes in our description/video, please give us your feedback.