The Waco Holocaust and Gangstalking : A Discourses 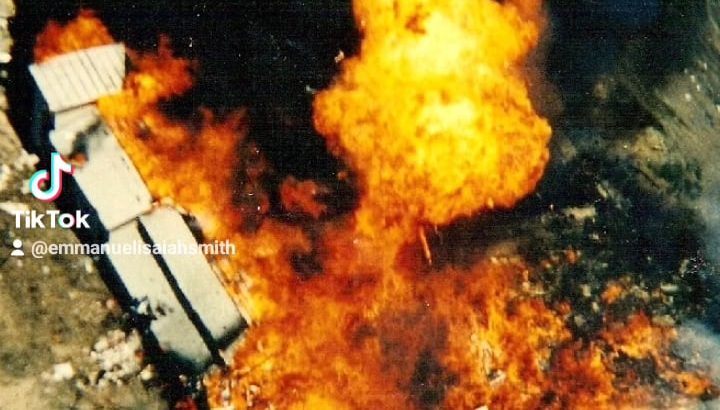 The Waco Holocaust is also known as the Waco Siege. This apocalypse of fire, brimstone, explosives, and gunfire occured on 4/19/1993 on the Branch Davidian religious compound in Waco, Texas. 76 (possibly 87) Branch Davidians were crucified in a war-like encounter with the FBI, the ATF, and the Texas Guard. David Koresh, the leader of the isolationist Seventh Day Adventist religious sect had captured the attention of federal law enforcement and possibly other interested third party gangstalking factions when he began purchasing firearms en masse. The reason, according to him was self defense. The USA federal government felt otherwise. Eventually he was deemed to be weird, steange, detrimental to society, and a-normal, much like a targeted individual is when he is initially “scoped out” for entry into a gangstalking campaign. In the Waco bloodbath, the Branch Davidian compund was stormed and was riddled with bullets and firebombed so as to ” neutralize the threat ” that the Branch Davidians posed to greater society. The standoff was videotaped, and broadcast to the world on television. 76 USA civilians including 25 children were burned alive and to a crisp by the ” authorities ” in what was a botched takedown of what had become a popular yet adversarial religious sect. President Bill Clinton even expressed remorse at how badly the operation was mishandled and regretted giving the green light to the law enforcement agents to carry out the operation at that time. There were elements of COINTELPRO used against the Branch Davidians in the months and years leading up to the eventual holocaust, carried out by the same disruptive treasonous, and cowardly private and governmental factions that perpetrate gangstalking to the present day. The Waco Siege, this holocaust never died, it only morphed. The gangstalking conundrum is the Waco Siege in a mobile, covert, and hard to detect form. There are no television cameras, no uniformed federal officers with guns and bombs, no explosions or machine gun fire, only the quiet, annoying, intrusive, and mafia like protocols taken against a United States citizen on United States soil. The perpetrators of the early gangstalking method learned something from the Waco Siege, the bloody holocaust that ended in a fiery shower for the Branch Davidians. They learned that the ” blaze of glory ” mechanism was unpopular, loud, legally and politically problematic, and detrimental to their cause of extermination of their opponents. They knew that in the future they had to be silent assassins, thieves in the night, behind-the-scenes manipulators, and covert killers. The stalkers have gone from firebombing religious compounds to breaking and entering, street assaults, food contamination, biological warfare, instigated police violence, workplace mobbing, derived car accidents, relationship sabotage, coerced suicides, and perpetrating psychological stressors. There are indeed other heinous tactics that are used against the targeted individual that I haven’t named. That is because the attacks are so numerous that it is difficult to pinpoint them all. The Waco Holocaust was only the beginning, but I your host, Emmanuel Isaiah Smith, learn more about gangstalking and its predecessor programs each day, and continue to draw the parallels and find the weak spots in the draconian program that I need in order to slay the beast with the Excalibur of Truth. Thanks for tuning in . #gangstalking #thewacoholocaust

Part of Emmanuel Isaiah Smith’s ‘ Gangstalking in Action Live Video Series ‘ – In this video you will see live unedited instances of street level gangstalking, a covert, organized, and highly mobile method of containing and obstructing someone, and impeding their physical movements and attempting to instigate altercations.