Justin Bieber and Michael D. Ratner: The Making of “Our World” – A Conversation with Jason Kennedy 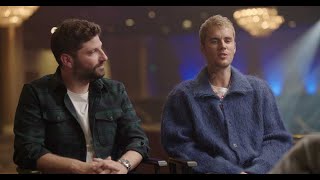 Justin Bieber & Michael D. Ratner sit down with Jason Kennedy to speak about the making of the documentary: Justin Bieber: Our World.

Justin Bieber: Our World takes viewers backstage, onstage and into the private world of the global superstar as he prepares for his unprecedented show, “T-Mobile Presents New Year’s Eve Live with Justin Bieber.” After a three-year hiatus from a full concert, and with concert venues shut down due to the pandemic, Bieber delivers an electrifying performance on the rooftop of the Beverly Hilton Hotel for 240 invited guests — and millions of fans across the globe watching via livestream. Produced and directed by award-winning filmmaker Michael D. Ratner, the documentary follows Bieber and his team for the month leading up to the show as they rehearse and construct a monumental stage set. The film also captures personal self-shot moments between Bieber and his wife Hailey through the artist’s own lens.
Follow Justin:
http://facebook.com/justinbieber
Tweets by justinbieber
http://instagram.com/justinbieber
https://www.tiktok.com/@justinbieber